The IEA stated that the energy crisis caused by Russia’s invasion “is in fact going to accelerate the clean energy transition,” with increased government spending on clean energy marking a “historic turning point” in transitioning from fossil fuels.

The Centre for Research on Energy and Clean Air verified Europe’s falling demand for fossil fuels. “EU markets are responding with a surge in renewables, heat pumps and electric vehicles. EU governments have raised their ambition on the transition to low-carbon energy. The response from markets and governments suggests this trend is likely to accelerate.”

It specifically warned countries scrambling for LNG projects to avoid getting locked into contracts that won’t be needed in a few years.

All natural gas (methane) produces the same CO2 emissions when burned, regardless of source. 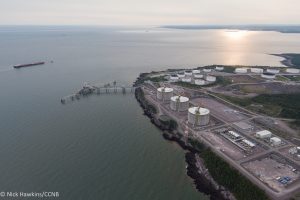 This process requires enormous amounts of energy to cool the gas to minus 160°C (-260°F).  Norwegian research firm, Rystad Energy, has calculated that the CO2 embedded in LNG production is 10 times higher than in piped gas.

Multi-billion dollar LNG terminals require long contracts to be economical – up to 40 years – locking in for decades the very greenhouse gases that we need to eliminate.

LNG facilities, and gas fields are also among the biggest leakers of unburned methane – the fastest growing of greenhouse gases – into the atmosphere, where it is 86 times more powerful than CO2 in trapping heat over a 20-year period.

Bloomberg News recently reported that, ”Canadian regulators said they were unaware of a methane cloud spotted by the European Space Agency’s Sentinel-5P satellite last month near gas pipelines, highlighting a disconnect between the nation’s climate ambitions and its emissions, which are the second highest per capita among G-20 countries. Canada’s methane and carbon dioxide releases have climbed more than any other G-7 country.”

No one knows how much gas can be economically recovered here. Only US gas company, SWN, did much testing, and it left without even drilling a test well. The Premier’s claim is an unsubstantiated sales pitch.

It would take many years and billions of dollars to complete the development of a shale gas play, transportation infrastructure, and gas-fired power plants. Meanwhile, the world will be leaving fossil fuels behind.

It ‘s too late in the climate crisis to replace coal with another fossil fuel.  A new US Department of Energy study said that the world will blow past 1.5°C, unless greenhouse gas emissions are halved by 2030.

This means, as the IEA stated, “The golden age of gas is approaching the end.”  It can no longer be considered a transitional ‘bridge’ fuel.

Scientific and economic reality undercuts each of the Premier’s policies, as does the moratorium condition requiring scientific certainty that fracking can be done safely – the lack of which brought down the last PC government.

Recently, the UK’s Conservative Prime Minister lifted a moratorium on fracking, only to quickly reinstate it after public outrage – including from fellow Tories, whose Manifesto also requires scientific certainty.

The reality in COP27 reports is that since 1980, every decade became the hottest decade. The last eight years are the hottest years.

This year has already seen 29 multi-billion-dollar weather disasters, and witnessed the crippling of the world’s great waterways, affecting commerce, food and water supply, and energy production.

Predicted, irreversible climate tipping points are at hand – some may already be here – while our climate plans and actions remain inadequate.

The Premier’s policies are for a world that no longer exists. The real world requires, as the UN counsels, “the rapid transformation of societies.”

A New Brunswick transformation means a society based on electrification, renewable energy, and energy conservation.

“The needed changes are economically affordable and technically possible. Time is running out.”