While geology may differ somewhat from place to place, the laws of physics, chemistry and human biology do not. Chemicals that cause disease in Pennsylvania will cause disease in New Brunswick. Toxic wastewater spills will kill aquatic life in streams regardless of location.

The Opposition wants to avoid discussing studies from places that already have shale gas, because those studies continually reveal problems. 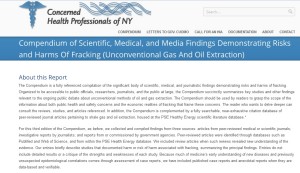 Would the PC’s have us ignore this science from elsewhere, and instead expose pregnant New Brunswickers to shale gas wells in order to run some home-grown experiments? Who will pick which citizens and areas get to be the guinea pigs? Will the PC’s volunteer their wives, daughters and backyards?

The “Compendium,” a collection of all studies demonstrating the risks and harms of shale gas, has added over 100 new studies in just the last 6 months.

This is just one example of the science being done elsewhere.

The Matter of Social License

This fact leads directly to the PC’s sudden interest in the Commission’s definition of Social License. The “working definition” provided by Commissioner John McLaughlin in a Telegraph Journal interview wasn’t detailed, but it largely resembles the international standard of “Free, Prior and Informed Consent (FPIC)” : a process used in consultations between resource extraction companies and people affected by their activities.”

Currently, there is no legal definition of Social License, but FPIC appears to one part of it, thus making some things clear.

Social License cannot be granted without going through the FPIC process. As Dr. McLaughlin noted, any consultations must be “Informed” with all the existing knowledge that all sides bring to the discussion.

In the case of shale gas, the required knowledge for risk assessment is just starting to roll in.

Over 50% of all the available studies on the impacts of shale gas development have been published in just the past year and a half.

The health studies mentioned above are only the first of many that are necessary. There is currently no information on the health or environmental effects of hundreds of the chemicals that may be used in shale development, and there is no systematic monitoring of groundwater in any shale gas area.

Also, Social License does not supersede the Charter of Rights’ guarantee of the Security of the Person, including the right to breathable air and drinkable water. These civil rights cannot be disposed of by commissions, executive orders, parliamentary votes, or a majority of voters in a referendum. So long as a credible threat to any portion of the citizenry exists, Social License cannot be granted.

Since the current state of the science surrounding shale gas is full of credible, identified or potential threats, plus a host of unknowns, it will be some time before Social License can even be discussed. The jurisdictions that extensively studied this science (New York, Quebec, Nova Scotia, and Maryland, for examples) imposed bans or long moratoriums.

The quandary for the PC’s and gas industry is how to get Social License, or bypass it, without actually having to examine the science in public. And with a growing worldwide recognition that climate change is an imminent threat to all nations, the challenge of getting Social License for any new source of unconventional fossil fuel will likely be nearly insurmountable.