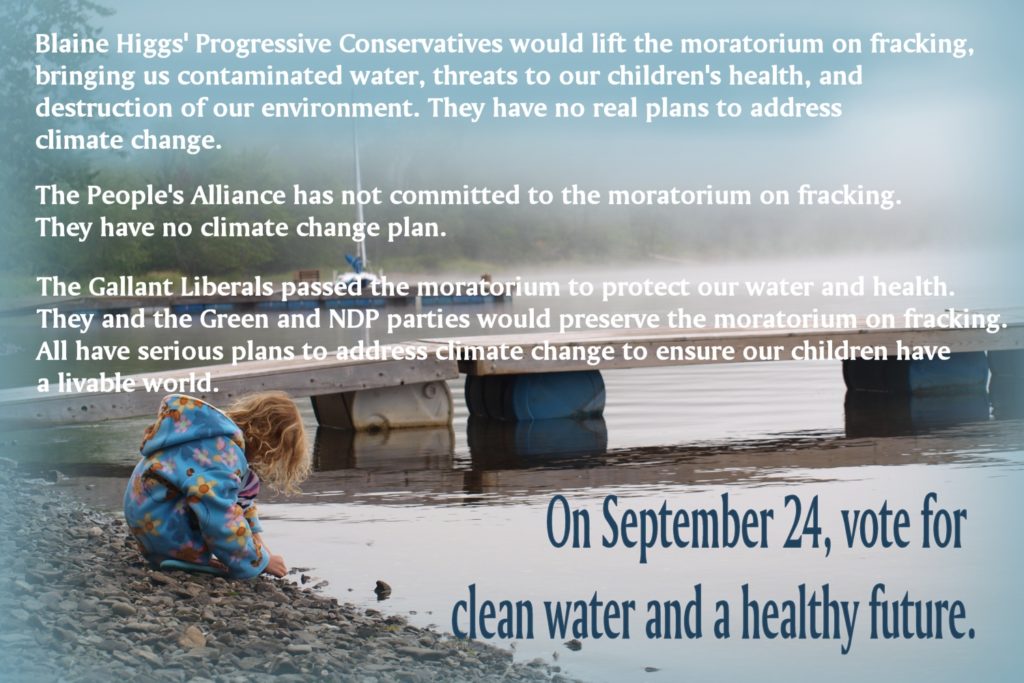 SGA is a non-partisan organization and has never endorsed a party or candidate. However, we have always opposed policies involving the expansion of shale gas into New Brunswick, and supported those moving us towards a green economy and halting climate change.

Therefore, we’re only commenting on the issues and parties that are our mandates: stopping shale gas and reversing climate change. When limiting the selection of parties to these two issues, the electoral choices become very clear.

Green, Liberal, NDP  all support keeping the moratorium on shale gas, or going further. They all have fairly detailed climate change plans. We will not judge whose plans are better, only note that they have climate plans and seem to understand the importance of the issue.

In contrast, the Progressive Conservatives are the only party that supports the establishment of a shale gas industry in New Brunswick.

Further, they use subterfuge in order to fool the electorate by omitting the words ‘shale gas‘, ‘fracking‘, or ‘moratorium’ in their platform, instead they propose ‘regional development gas in places that want it.’  This is an idea for which they have provided no explanation or definition, nor addressed the fact that the ill effects of shale gas are widespread and not confined within politically-drawn regional boundaries.  Rapidly depleting shale gas wells require that new wells must be drilled continuously.  Thus, a regional industry will not stay regional for long.  This is simply a way for the shale gas industry to get its foot in the door.

The PC platform on climate consists mostly of general talking points with few details and does not recognize shale gas as a contributor to climate change.

The People’s Alliance simply has no clear position on the issue of shale gas, although the party appears to align with that of the PC’s.  After eight years, it still cannot apparently decide whether to base its policy on public health, environmental safety, climate stability, regional popularity or the profit motive.  This plus the lack of any environmental plank or climate change policy reflects a lack of concern about these issues.

On Sept. 24th, vote for a party that has a path to a healthy future.