Resorting to militarized action against peaceful protectors over an issue that involves basic unresolved issues, such as relationships between the government and indigenous people, is not only poor policy, but also anathema to our values, our stated intent for reconciliation, and our international obligation to honour the terms of the United Nations Declaration on the Rights of Indigenous Peoples (UNDRIP).

While the actions in question took place a continent away, they have resonated strongly with those of us in New Brunswick who experienced the similar action of the RCMP raid on Elsipogtog over five years ago.

It too appeared to be a case of government employing the RCMP as an enforcement arm of fossil fuel interests; elevating commercial interests via an injunction over the larger and fundamental issues of civil rights, indigenous rights and international obligations at play.

We have two requests to make of you.  The first is to make the federal government aware of our position and our support for the We’suwet’en Clan Leaders. The larger issues must be addressed and resolved before any further action to remove indigenous peoples from their unceded lands, and before any commercial activities continue. 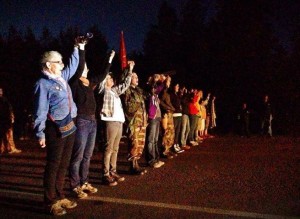 The second request is for you and the federal government to put pressure on the RCMP Commissioner to release the CRCC investigation report on the events at Elsipogtog to the public.  It has been over 5 years in preparation, and via our communications with the CRCC we know that it has been completed and is only awaiting a decision to be released.

It is doubly important to release it now. First, it may contain lessons that would be applicable to the current situation in BC, and thus of immediate importance to all parties.

Secondly, the Conservative government in New Brunswick (including those in power at the time of the Elsipogtog raid) are planning a repeat of the actions that led to the debacle in Elsipogtog by lifting the moratorium on shale gas and bypassing consultations with indigenous peoples.

Our continual entreaties over the last 5 years have not hastened the release of the report, so we are asking for your assistance.

Recently a scholarly book called, ‘Policing Indigenous Movements’, was published, which concluded with a chapter on Elsipogtog.  Suffice it to say that the portrayal of the government and the RCMP was not flattering, but it is the image that Canada continues to show to the world.

The citizens of New Brunswick and Canada, especially its indigenous people, need to see what actually transpired at Elsipogtog, so the actions taken there will not continue to haunt us and we can get along to the real business of reconciliation in all its forms.

Thank you for assistance.  Please let us know what responses or news that you receive.