There was little doubt why the Justice asked this question. The Court had received overwhelming evidence about climate change and its calamitous effects.

Our group submitted judicial decisions from courts around the world, based on the principle that increased greenhouse gases emissions from anywhere, no matter how small the amount, add to the global totals that threaten everyone.

Clearly the courts are now recognizing the obvious about climate change and the elemental part fossil fuels play in it.

Saskatchewan and its co-plaintiffs, realizing that being “deniers” is no longer politically acceptable, proclaim concern about climate change. But their claims ring hollow, as all these provinces have recently elected Progressive Conservative governments whose climate policies belie their words. Sadly, New Brunswick is a case in point. Its signature energy policies of a new shale gas industry and a resurrection of the Energy East bitumen pipeline contradict concern about climate change, despite official rhetoric to the contrary.

The first necessity to slow climate change is to stop creating additional greenhouse-gas emissions from new fossil fuel sources. This is the very thing that carbon pricing is designed to deter.

How could New Brunswick meet any greenhouse gas limits while starting a shale gas industry that would create huge volumes of emissions from leaking methane and from burning large quantities of diesel fuel and gasoline? Reviving Energy East is a fantasy few experts consider viable, not least because its approval would have to consider the climate effects of its upstream and downstream emissions. It didn’t face that requirement last time around, but would now.

By misreading climate change considerations, and fossil fuel market forces, our government’s policies both suffered setbacks. After promising that Corridor Inc. had millions of dollars to immediately invest in local shale gas, the premier appeared to be blindsided when Corridor said it wouldn’t be drilling new wells until 2021, and only if it found a financial partner.

This should not have been a surprise. The gas market is flooded. Shale gas has never been profitable for lenders and investors, who are now demanding long-delayed paybacks. The easy money spigot is closing, making it tougher to get financial backing. A recent Supreme Court decision, finding environmental clean-up obligations have precedence over repaying loans, has made banks warier about fossil fuel investments.

Mr. Higgs has countered with the position that local shale gas could replace gas from Nova Scotia’s about-to-close Sable Island facility. However, gas suppliers, noting that a new local shale gas solution was years away, announced they would supply the Maritimes with western gas via the pipeline that was the centrepiece of Energy East.

With Energy East dead, and with no apparent market justification for local shale gas, Mr. Higgs now gives us a truly convoluted policy rationalization for both.He would have us believe a local shale gas industry (years in the making) would convince gas pipeline companies and western producers to give up their Maritime business, and once again go through the near-impossible task of Energy East approval. Besides needing dozens of things to go exactly right, the many years required would bring this plan to fruition at the very time when fossil fuels must be reduced by nearly half, and when carbon pricing would be at a maximum. It strains credulity.

Readers should note these setbacks to the premier’s plans are not due to political opposition, or environmental activism, but rather to business decisions and market forces in the industry. 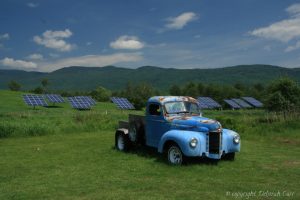 Climate change, by necessity, will be a major market force in reducing fossil fuels, while cheap renewable energy is another. Energy planners and pundits should begin recognizing the obvious, as Alberta just did in contracting three new solar farms to provide 55 per cent of the government’s electricity, at nearly half the cost of natural gas. The U.S. Permian Basin, the heart of shale oil, produces so much accompanying gas they pay to get rid of it. Yet, plans for the industry’s electricity needs include a solar farm and the world’s largest battery.

Despite many similar examples, Mr. Higgs maintains renewable energy is still too expensive, and continues dealing in the false hopes of fossil fuel riches. Both ideas are from a bygone era. The climate threat and market forces clearly indicate there is no future in a local shale gas industry. We, too, need to recognize the obvious.

Jim Emberger is spokesperson for the New Brunswick Anti-Shale Gas Alliance, an organization intervened in the recent court challenge over carbon pricing in Saskatchewan.