For four years the shale gas industry dominated local media via coverage of the pro-shale Alward government. Industry and its allies frequented the business sections and held province-wide“information”sessions.

And yet, they couldn’t make their case.

Now these same groups have created a website to provide a supposedly uninformed public with information it somehow missed.

The group’s first example is a draft version (not yet peer-reviewed) of a United States Environmental Protection Agency, which they hail as“the most comprehensive study of hydrofracturing ever conducted.”

Actually, the report studied only one topic:“effects on drinking water resources.”The EPA’s website, and the report itself, stress that it is not comprehensive, and both provide long lists of everything that wasn’t studied – including air pollution and health. 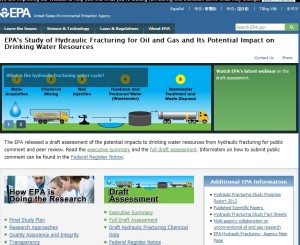 Next, the group quotes a single sentence from the summary – that the EPA did not find“evidence of widespread systemic evidence of impacts to drinking water.”In actual context, the report also states that,“data limitations preclude a determination of the frequency of impacts with any certainty.”

In other words, there was not enough monitoring of wells to determine how many were contaminated. The EPA specifically criticized the industry for hiding data through the use of gag orders placed on contamination lawsuit settlements.

While the EPA report couldn’t say how widespread the contamination was, its far more significant finding was the documentation of water contamination cases – caused by shale activities – in every risk category it examined. These categories are now real, not merely potential, areas of concern.

The group also cites is a British Columbia report, which claimed a low probability that hydrofracturing would result in health problems. It was withheld from release for many months, likely because of its weak conclusions.

It’s a computer-modelling-only study (by a consulting firm, not the B.C. Ministry of Health) focused on a relatively small number of potential air pollutants and illnesses, ignoring, for instance, the endocrine disrupting chemicals associated with shale gas.

The authors admit there was little existing data to feed the computer model, and they conducted no actual air monitoring or assessment of health. Data often had to be created from secondary sources, some of which were incompatible and some out-dated, further weakening the conclusions.

One of several experts who were asked by the B.C. government to peer-review the report commented, “The Phase II HHRA (Human Health Risk Assessment) does not include the collection of new data. There will be no individual-level data on health effects, there will be no questionnaires and there will be no direct measure of pollutant concentration. Based on this discussion and your criteria, the Phase II results should be interpreted cautiously if not completely ignored.”

Any value in this report is in its recommendations, which urge the province to establish baselines, map aquifers, do better health monitoring and make sure that regulations are science based. Good advice!

Both of these studies contain things of value. The problem lies is how the industry misrepresents their meaning and significance, knowing that few people will read a 1,000-page report to find the facts for themselves.

Their suggestion that these two reports in any way alleviate concerns about contaminated water or the probability of health problems is misleading at best, or delusional.

In contrast, an analysis of all peer-reviewed studies on shale gas conducted by the group Physicians, Engineers and Scientists for Healthy Energy concluded that 84 per cent of all health studies found actual or potential health problems versus 16 per cent that did not.

Looking at those figures and the studies that they reflect may explain why a number of jurisdictions passed bans or moratoriums in the last year, and why the industry feels the need to mount this desperate, last ditch campaign.

Many of the links from the new website are to the industry’s Energy in Depth website, where the lead story is still about debunking Gasland, a five-year-old movie. Maybe that says it all.