A safe distance from gas wells has yet to be established. How much exposure to various toxins is harmful, and is the exposure influenced more by intensity, proximity or length of time? Can harm be reduced by industry practices or do some problems have no possibility of mitigation?

We do know that many of the chemicals used are toxic and/or carcinogenic, but there are hundreds of chemicals used about which we know nothing, as they have not been tested. No one has an inkling of how these individual chemicals will react in combinations with each other and with the natural toxins and radioactivity found underground, and under heat and pressure.

Getting the answers to these questions will take many years. Longitudinal public health studies take place over long periods of time, because that is often the time-frame of disease and illness development. Even the baseline studies necessary to get started, as recommended in the Chief Medical Officer for Health’s report (and re-stated by the current government), will take considerable time to accomplish.

So, any honest and objective answer to the question of the safety of shale gas extraction cannot take place at any time in the near future. The moratorium process, when unveiled, must reflect the science, which by its nature will take a long time to accomplish. Any lesser standard will be a reflection of political concerns, not those of public health.

The government may take its time to do justice to the final moratorium legislation, and do what it needs to in respect to renewing gas leases, but all parties should have the clear understanding that there is no way to lift the moratorium in the near future if we are serious about protecting public health.

The second reason for a moratorium is that two-thirds of the voters in the last election voted for parties that called for a moratorium. It is time for the Opposition to recognize this and simply get on with seeking other ways to improve New Brunswick. 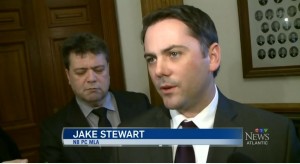 The Opposition Energy Critic’s argument that the Liberals should break their campaign promise on the moratorium, because, “we live in New Brunswick – a lot of governments have gone back on their word,” [1] is just stunning in its publicly voiced cynicism and contempt for the citizens of New Brunswick.

Its desperation is a signal that the issue is no longer being debated rationally, but only as political theatre. We need to move on.

The New Brunswick Anti-Shale Gas Alliance represents the interests of New Brunswickers opposed to unconventional gas and oil exploration and development, while promoting a future in clean energy alternatives.