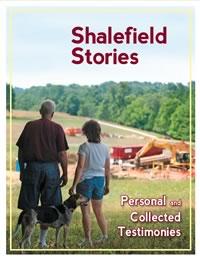 Across the country, fracking is contaminating drinking water, making nearby families sick with air pollution, and turning forest acres into industrial zones. We believe it is vital for the public to hear directly from people living on the frontlines of fracking, and so Environment America Research & Policy Center is supporting the Shalefield Stories project—a booklet designed and published by Friends of the Harmed, group of volunteer citizen-journalists committed to providing support to affected individuals and families living in the shalefields of Western Pa.

“Fracking is impacting the lives of families living in its shadow. It’s time for their voices to be heard. That’s why we’re supporting the Shalefield Stories project.”

“The industry will tell you that the mile or two between the zone that’s being fracked is not going to let anything come up. But, there are already cases where methane gas has made it up into the aquifers and atmosphere. Sometimes through old well bores, sometimes through natural fissures in the rock. What we don’t know is just how much gas is going to come up over time. It’s a point that most people haven’t gotten. It’s not just what’s happening today. We’re opening up channels for the gas to creep up to the surface and into the atmosphere. And methane is much more potent greenhouse gas in the short term – less than 100 years – than carbon dioxide.”