The rapidly unfolding climate crisis, as recently reported in Brunswick News publications has climatologists describing the speed and extent of recent record-shattering climate events as ‘unprecedented’ and ‘insane’. Given this frightening new reality, Canadians can be thankful that at least one governing institution understands the seriousness and immediacy of the climate emergency.

Progressive Conservative governments remain climate deniers by their continual embrace of all expansions of fossil fuels.

Apparently, only the AFN combined climate science with observations of the world to understand that ‘all’ climate solutions depend on the rapid reduction and eventual elimination of fossil fuels.

Scientists say we have ten years to reduce our greenhouse gas emissions by nearly half.  Practically and politically, that means starting by roughly the end of 2020.

Time is required to ensure that the transition causes the least hardship for everyone. We’re all in this together. 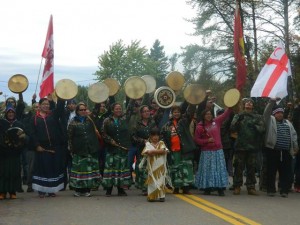 Thus, it was heartening to see New Brunswick’s indigenous leaders unanimously take Premier Higgs to task on shale gas.  His reply, that uncertain ‘financial rewards’ are worth the risks–risks, it should be said, which are existential–was equally disheartening.

But most disquieting was your July 30th editorial (‘Violent protests are never legitimate’), which followed news coverage of a discussion about shale gas and pipeline consultations at the AFN meeting in Fredericton.

The editorial implied that indigenous opposition to fossil fuels might involve violence. It was thus  repeating an unsubstantiated narrative of events in Rexton six years ago.

All we really know is that the RCMP conducted a military raid on a small number of non-violent protesters.  After six years of investigation, every aspect of that raid remains suspect, including the burned police cars. Why was no one ever arrested for that crime, despite witnesses describing non-indigenous perpetrators?

The proper editorial course is calling for the public release of the completed investigation, not reviving insinuations based on long-standing rumours.

And, the proper governmental course on climate is adopting our indigenous institutions’ realistic views and acting accordingly.