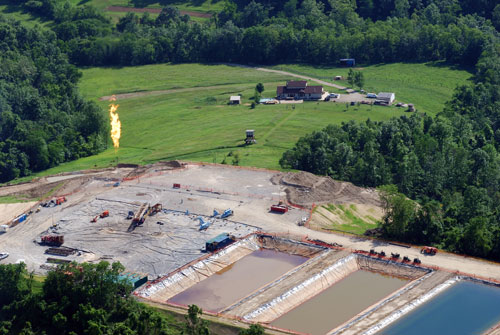 Fracking wastewater added an overwhelming new set of problems stemming from the large numbers of fracking chemicals used, and the variety of naturally occurring toxic substances brought up from the earth by fracking.    Starting in 2010, the Endocrine Disruption Exchange conducted an exhaustive study of all these chemicals, followed in 2015 by the U.S. Environmental Protection Agency, and this year by Yale University.    All three reported the same findings.

First, roughly a thousand different chemicals were reported by industry as used in fracking.

Second, hundreds of these chemicals have never been tested for their effects on human health or the environment. Methods to detect and remove many of them are non-existent and can be very expensive.

Third, of the chemicals for which there was information, many were already known to be toxic, carcinogenic or both.

Finally, there is no ‘one-size fits all.’ The wastewater from almost every frack contains a different combination of chemicals. Any testing referred to above was for individual chemicals only. There has been no testing of these chemicals in the almost infinite numbers of combinations possible with each other and the natural elements with which they mix.

The complexity and cost of designing and building a system to render such wastewater safe for release into the environment is almost unimaginable. That is why there still is no good method for the disposal of fracking wastewater. The industry’s preferred method of disposal is simply to pump wastewater underground into deep injection wells under pressure and hope it stays there.

Not surprisingly, there are problems with this method. No one really knows how well-contained the waste is at hundreds of different sites, or how long it will stay contained, or how far it could migrate. But the main problem is that high-pressure pumping of billions of litres of liquid, containing lubricants among other things, can cause geologic faults to move, thus causing earthquakes.

These earthquakes have been documented in British Columbia, Alberta and widely in the United States, where the state of Oklahoma has gone from having almost no earthquake activity to becoming the earthquake capital of the world due to wastewater injection.    This deep injection well method of wastewater disposal is not allowed in New Brunswick, but remains the ‘best practice’ for the industry, illustrating the uselessness of that term.

Proper wastewater disposal is vital, because the last six years of public health research on exposure to fracking chemicals has linked exposure to a long list of illnesses including birth defects, low-weight and premature babies, asthma, cardiac problems, developmental and reproductive diseases, and recently, childhood leukemia.

In 2011, the American Public Health Association acknowledged potential health problems with fracking, but took a wait-and-see attitude, as research was new and limited. This year they updated their position, citing 700 studies and sounding an alarm.

“Environmental and health impacts are evident at every stage of unconventional gas development.”
“Mounting empirical evidence shows harm to the environment and to human health, and we have no idea what the long-term effects might be.”
“Ignoring the body of evidence, to us, is not a viable option anymore.”

So, we thank the government for legislation plugging loopholes in the laws that protect our water, marine resources and health. More such legislation is needed.

At the same time, we are puzzled by statements from Tory Opposition leader Blaine Higgs and industry spokespeople, who are“shocked”by the government’s announcement. Apparently they missed the previous announcement by the U.S. Environmental Protection Agency when it instituted similar rules.

The shale gas industry cannot be a solution to New Brunswick’s problems, while the industry cannot even solve its own. Besides wastewater disposal and mounting health worries, other problems remain.

A study from Alberta this week tied earthquakes more closely to the fracking process itself (not wastewater injection as discussed above.)

Recent studies established that powerful climate-changing methane (natural gas) emissions from the oil and gas industry are up to 60 per cent great er than previously estimated.

With these unsolved problems, plus a continuing glut of gas causing low prices and putting more companies into bankruptcy, and a global battle against climate change, why would any political party tie its future to shale gas?