Comments from NBASGA spokesperson, Jim Emberger:   There are just so many people from every corner of the province, every walk of life, every ethnic background, indigenous people and settlers who made this possible that it is an impossible task to list them.  The cast of heroes has changed constantly over the last six years from those who were lonely voices in the beginning, to the organizers of the movement, to the demonstrators, to those putting themselves in harms way – the writers, the speakers, the donators of money, food, expertise – those who showed up when called, for whatever needed to be done. 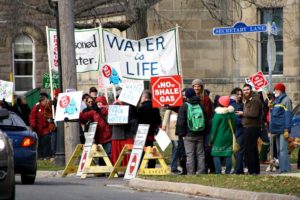 This campaign has shown how democracy should work, and that it possible for citizens to band together to advance their will and protect themselves, their neighbors and the earth. It should not have taken such a herculean effort, but now that we know that it can be done, and how it can be done, the next time should be easier – because their always will be a next time.

But for now, we should celebrate the saving of our province and congratulate ourselves on an effort whose success was undoubtedly a surprise to the powers-that-be everywhere.

Below are some congratulatory emails from our friends and allies:

And from those around the world with whom we have been in touch.

This next and last quote is from a person in Yorkshire, UK, where the government has just given the OK for shale licenses.  They are where we were 6 years ago.  Kathyrn, the writer, had asked me to send an email to their paper – The Yorkshire Post – which I did (the day before the moratorium extension), and they did a news article from it.  So it is additionally gratifying that we are able to help those in other places with our experiences. If you would like to read the UK article:  http://www.noshalegasnb.ca/nbasga-lends-voice-uk-activists/

Thank you !!! God bless you.  There is great fury and stirrings of public dissent here following the decision. Yorkshire groups are taking legal advice over judicial review. Now it seems that the government is withholding a report by the Committee on Climate Change that says that fracking will ruin the environment. Thanks for your support! With best wishes, Kathryn

Good wishes to all,
Jim