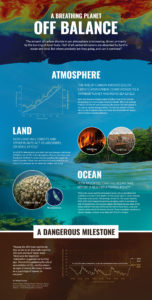 North America witnessed a steady stream of spectacular events. The Atlantic hurricane season saw the most tropical storms in a row to become hurricanes, three major hurricanes making landfall, the most rain from any weather event, the longest lasting major Atlantic hurricane and the fastest growth of a hurricane from Category 1 to Category 5.

Hurricane Ophelia, the most powerful Eastern Atlantic hurricane, was a rare storm that went straight north to hit England and Europe.

The Pacific coasts of North America saw destruction by wildfires reminiscent of the Fort McMurray fire, but on a larger geographical scale. Smoke, ash, bad air and health problems blanketed hundreds of kilometres for weeks on end.

Canada’s third coast, the Arctic, is warming so fast that scientists say there is no going back to the frozen arctic we once knew. Canada will be one of the first countries to deal with climate refugees, as the Inuit people struggle to survive in an increasingly unrecognizable ecosystem.

The worldwide insurance industry paid out record damages for these events, including New Brunswick’s ice storm, and the U.S. alone set a record for losses at above $300 billion (USD). Even these may be underestimates, as several Caribbean islands were nearly totally destroyed, with loss of life.

Scientists can now say with confidence that, to varying degrees, climate change exacerbated or made these events more likely.

These close-up and dramatic stories may be why our governments finally seem to be “talking the talk” on fighting climate change by creating national and provincial climate plans, which contain many good ideas. However, objective audits of their implementation, rigour and adequacy – for example, by the auditors general of Canada and New Brunswick – have found them still lacking.

We (governments and many people) are like a patient newly diagnosed as pre-diabetic. We know it could be serious, but we hope that joining the gym will be enough to forestall the really bad consequences, without having to make real changes to the lifestyle and diet that we’ve always known.

Apparently, we humans are hardwired to value short-term comfort over long-term necessity. We hope for the best and resist change, even when confronted with evidence of danger. For example, the physics of climate science clearly indicate that we cannot afford to burn all the fossil fuels we are already exploiting, without destroying ourselves. Institutions, such as the World Bank, have recognized this and will no longer fund fossil fuel projects.

Scores of world-leading economists have recently stated,“Simply put: there is no more room for new fossil fuel infrastructure and therefore no case for ongoing investment.”

Yet, despite these scientific and economic imperatives, Canadian climate change plans, from all but the Green party, still include expanded tar sands development, pipelines like Energy East, new LNG terminals and hydrofracturing. Governments need to acknowledge that no new fossil fuel development can take place, and that we must quickly, continually and significantly decrease their usage entirely.

As in the example of our diabetic patient, changing just one thing will not stop the disease. Our climate plans must acknowledge the need to change our self-destructive habits, no matter how used to them we are. Otherwise, all other parts of the plans are likely to fail, as people won’t be willing to make changes in their lives and livelihoods, and businesses will face future uncertainty.

With government clearly framing the issue, people and business could come to find that the very changes and investments necessary to save the planet can also bring jobs, prosperity, health and happiness.

According to researchers in the journal Nature, the most accurate climate models are those that also show the most warming and the fastest rate of temperature increase. This means that even plans made to achieve the goals set in Paris are inadequate, and global temperature increases will reach dangerous levels unless our plans become more serious.

Only a few years remain to influence the outcome. One hopes that New Brunswick’s political parties will commit to facing this reality, and lead us to a new“normal.”