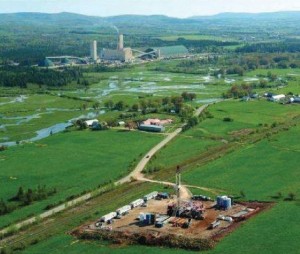 Four years ago the number of studies on shale gas were limited, but still troubling enough to adopt moratoriums in New Brunswick and around the world.  Now there are over 1,300 scientific studies and investigations that tell us those moratoriums were justified.

‘The Concerned Health Professionals of New York’ and the Nobel Prize winning group, ‘Physicians for Social Responsibility’ have continuously gathered all this research into a ‘Compendium’ that anyone can access.

The Summary of the ‘Compendium’ states, “Earlier scientific predictions and anecdotal evidence are now bolstered by extensive empirical data, confirming that the public health risks from unconventional gas and oil extraction are real, the range of adverse environmental impacts wide, and the negative economic consequences considerable.”

Emberger says, “It seems doubtful that the Conservatives have even bothered to examine this extensive amount of science. How will they convince voters that the now well-documented threats to their health, water, and air are justified?  And we haven’t even mentioned that the gas industry is a major contributor to climate change.”

NBASGA regrets that the election won’t be held over issues that could actually help New Brunswick, and instead the Conservatives will scrape the scabs off of what were some of the Province’s worst days and all for an industry that has a very limited future.