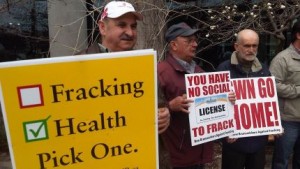 As I have documented in previous articles, the “clear and credible evidence” from science and public health studies, court cases, journalistic investigations and government regulatory actions reveal shale gas impacts including:

As the Progressive Conservatives haven’t provided the public with any credible evidence that these risks have been addressed, how can they ask anyone for social license?

In many U.S. states that launched the shale industry before conducting public reviews, hundreds of cities and counties have passed resolutions restricting fracking.

Before New Brunswick’s last election, over 70 municipalities and dozens of medical, public health, religious, community, environmental and indigenous groups called for a moratorium – including Mr. Higgs’ community of Quispamsis.

The PCs apparently are aware of this widespread public opposition, and attempt to sidestep it by claiming that fracking will be limited to Sussex and Albert County, because those localities want it.

Yet the municipality of Sussex Corner supported the moratorium, as did citizen groups in the nearby agricultural area of Cornhill, and in Penobsquis, where existing gas wells are located.

In Albert County, the municipalities of Hillsborough and Alma supported the moratorium, as did the neighboring city of Moncton. Citizen groups – e.g. the Petitcodiac Watershed Alliance, Water and Environmental Protection for Albert County, and the Chipoudy Communities Revitalization Committee – have reaffirmed their support for the moratorium.

So who will grant “social license,” and how is “regional” defined? The PC platform contains nary a clue.

Do businessmen reaping financial benefits, but living away from the wells, get the same vote as pregnant mothers living next to gas wells, who – willingly or not – will assume greater health risks?

Airborne chemical pollution affects those with asthma and respiratory problems up to hundreds of kilometres away. Likewise, waterborne contaminants can travel the length of whatever waterways they enter. How far downstream and downwind is the regional line drawn for health and environmental risks?

Increased health care and road repair costs have been documented everywhere a shale gas industry exists, as have the costs of dealing with abandoned wells. These financial risks and costs will be borne by all the taxpayers of New Brunswick.

Leaking methane gas damages the climate for everyone.

These widespread risks to health and environment from fracking have been proven. Living on one side of some arbitrary regional line doesn’t grant the right to accept those risks for everyone.

The ethics of medical research require that every individual give their informed consent to be a ‘guinea pig’ before being exposed to toxic, carcinogenic or untested chemicals.  Fracking, which uses hundreds of such chemicals, is a massive uncontrolled experiment and should require no less a standard.

And yet, the PCs are running with the slogan that they will restore trust.

Mr. Higgs recently wrote a commentary in this newspaper on his plans to fight climate change (“A carbon plan, not a carbon tax,” Aug. 18, A11). It did not once mention his policy on shale gas. Does he know the gas industry is a major contributor to climate change?

Also unaddressed is the 800-pound gorilla in the room. The rapid depletion of shale gas wells means the industry must continually drill new wells. Thus, a “regional” industry won’t stay regional for long.

The PCs have not discussed these concerns, or any of the risks catalogued above. Their platform does not even contain the words “shale,” “fracking,” or “moratorium.” Doesn’t the path to trust demand a demonstration that one understands and can discuss the concerns now, before the election?

If facts don’t support a policy, the policy must change. Not discussing the facts won’t build trust.

Canada’s Dr. John Cherry, one of the world’s foremost experts on groundwater contamination, testified before our Commission on Hydrofracturing, noting, “It is hard to make the case for social license if you have no scientific proof of safety.” These are words the PCs, and indeed all New Brunswickers, need to heed.