Edited versions of this Commentary by Jim Emberger were printed in the 10 March 2021 editions of The Daily Gleaner, The Times Transcript, and in the Telegraph Journal.

In mid-March New Brunswick shale gas leases held by US corporation, ‘SWN’, will expire, and there is no word if SWN will seek a renewal or extension.

Ten years ago SWN showed up in our communities; igniting a nearly 5 year, hard-fought, citizen opposition campaign that defeated the Alward government, and brought a moratorium on hydrofracking.

Anniversaries are times to reflect on what might have been.  By fortunate coincidence, the Ohio River Valley Institute just released an economic retrospective of 2008 – 2018 for the 22 counties in Pennsylvania, Ohio and West Virginia that make up the Marcellus and Utica shale gas formations.

Gas proponents frequently cited these premier shale gas areas as a model for New Brunswick, and the Marcellus is home to SWN. 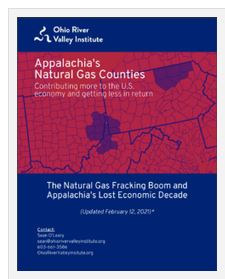 ,” summarizes the decade as one that saw these counties pumping an enormous amount of gas, greatly boosting GDP, while simultaneously lagging economically behind both their states and the nation.

In one county, where shale accounted for 60 percent of the economy, GDP grew five times faster than the nation’s, but jobs declined by 7%, and population by 2%.  Only about 12% of the gas income went to wages and employment. The lion’s share went to shareholders, plus equipment and workers brought from other places.

The report concludes, “It is a case of economic growth without prosperity, the defining characteristic of the ‘resource curse’.”

Report author Sean O’Leary noted, “What’s really disturbing is that these disappointing results came about at a time when the region’s natural gas industry was operating at full capacity. So it’s hard to imagine a scenario in which the results would be better.”

The reasons are clear: boom-and-bust extractive industries create extreme economic volatility, which makes it difficult to start or expand other businesses.

Drilling is capital intensive, but it doesn’t employ a lot of people.

Air, water, and noise pollution, and their impacts on health and environment, drive people away.

As Parfitt describes it, “where once there were traffic jams in the middle of nowhere with idled 18-wheelers, lined bumper-to-bumper for as far as the eye could see, today you can drive the 320 kilometre round-trip to the Cabin gas plant from Fort Nelson and not see a soul.”

What you can see, however, are many of BC’s 770 orphaned gas wells. Five years ago, there were just 45. The clean-up costs will cost taxpayers billions. 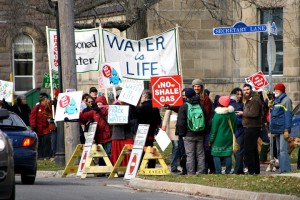 Citizens, citing non-industry expert witnesses, predicted these types of economic outcomes in testimony before the 2014 NB Commission on Hydrofracturing. They also accurately predicted that fracking would cause earthquakes, that the hundreds of toxic fracking chemicals would cause pollution and health problems, and that no safe method of disposal for toxic wastewater would be found.

Prior to the Commission the government listened solely to industry PR and pie-in-the-sky sales pitches. Though some were obviously unbelievable, (ex. 100,000 wells had been drilled with never a problem) they promised politicians a magic economic silver bullet with lots of jobs – on paper.

Unfortunately, our current politicians may not have learned a lesson from shale gas. Based solely on a new industry’s claims, the government is investing millions of taxpayer dollars in small modular nuclear reactors, ignoring citizens’ informed concerns.

Though this technology exists only on paper, the industry promises lots of jobs – 10 or 15 years from now. The industry promises that it can handle new forms of radioactive waste – in theory. It claims it will be the next big energy source – yet it depends on taxpayer financing, with little private investment.

Since citizen research-based opposition was spot on with shale gas, why does the government continue to only pay attention to shiny sales brochures from corporations looking for handouts?