New Brunswickers know that our neighbors, Quebec and Nova Scotia, passed lasting moratoria following their reviews. The state of Maryland just enacted an additional two and a half year moratorium based on a review conducted by their highly regarded university system’s public health school.

But the most thorough review was undertaken by the state of New York. It had already declared a moratorium based on a previous public health review. Last week, after completing a ‘seven-year’ Environmental Impact Statement (EIS), they essentially banned shale development. All these jurisdictions reached similar conclusions, but New York’s extraordinary effort deserves quoting. 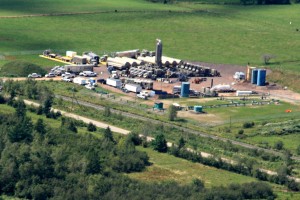 The EIS concluded that the scientific evidence showed:

In other words, there are many serious risks needing much more study, the number and severity of the risks is continually increasing, and the effectiveness of mitigation and control efforts are questionable.

Most of the hundreds of scientific papers supporting these conclusions about risk can be found in two places and are periodically updated:

One such comes from medical research about ‘endocrine disruptors’. These are chemicals that in miniscule quantities act on the body’s hormone system, causing developmental, immune system and reproductive diseases. Children and pregnant women are particularly at risk.

A new review of the science about them concluded, “Many of the air and water pollutants found near [Unconventional Oil and Gas] operation sites are recognized as being developmental and reproductive toxicants, and therefore there is a compelling need to increase our knowledge of the potential health consequences for adults, infants, and children from these chemicals.”

Another study found that several endocrine-disrupting chemicals commonly used in gas production caused disease at a tiny fraction of the levels considered ‘safe’ by current standards. It also found that levels of these chemicals in the “air near oil and gas development can be orders of magnitude higher than exposures for which we found health effects.”

(video below recorded during night flaring of gas well near Elgin, NB in 2014)

As to the questionable effectiveness of mitigation efforts, the Council of Canadian Academies already noted that neither the government nor industry adequately monitor shale development.

Therefore, without scientific data, no jurisdiction can claim its ‘world-class’ regulations are based on science. Industry-defined ‘best practices’ are not scientific guarantees of safety or effectiveness.

The clear trends in the scientific review of shale gas are the increased identification of risks,
and the resulting increase in bans and moratoriums.

The few studies that our Energy Institute could complete in our one-year moratorium would have little effect on trends based on hundreds of studies. The Institute’s reputable scientists deserve thanks for doing some worthwhile baseline studies, but existing departments such as Environment and Health can direct such research.

The Institute had a problem beyond its ethically questionable founding by the former PC government and the now discredited Dr. LaPierre.

If it had been intended to be an ‘Energy’ institute, its mandate would have been to examine all energy options and help choose the best one, rather than to simply make shale gas palatable to the citizenry.

Our current Commission, staffed by volunteers, with only a travel budget and a less-than- one-year window, will work in the shadows of jurisdictions who conducted multi-year reviews with paid researchers, multi-million dollar budgets, and extensive human resources.

It is almost inconceivable that our Commission could reach a different conclusion. To contradict the now well-established scientific evidence of unacceptable risk, it would require truly extraordinarily difficult public explanations and levels of proof.