We recognize that the Government is under significant pressure from the oil and gas lobby, in both public and private, to reverse or weaken its decision, and its promise to the electorate. This is no less than a direct attempt by industry to subvert the will and voice of the people and therefore, is also a direct attempt to undermine our democratic process. 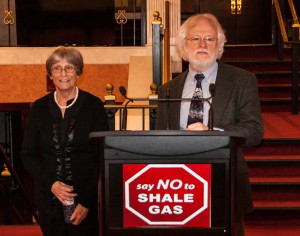 Others have commented on how unseemly it is that much of this rhetoric comes from those who have strong personal, business and financial ties to the oil and gas industry. And we note that these arguments focus on unproven economic and job benefits, but despite repeated efforts by this organization and our Chief Medical Officer, Dr. Eilish Cleary, the proven health impacts that accompany oil and gas extraction are never mentioned.

We have met with several MLAs who admit that they do not have a thorough understanding of this issue. This has also been evidenced by comments in the media regarding fracking with propane versus water. While the use of propane gel reduces the volume of water required, it still injects a mix of toxic chemicals into the ground and potentially into water aquifers and still vents toxic gases including methane into atmosphere. All of which is harmful to public health and contributes to climate change.

Along with the disinformation that the industry is pushing through the media, the Liberal caucus needs to hear the compelling research coming from scientists and economists with no ties to the industry.

Having monitored global research on the issue for the past four years, NBASGA has the ability and willingness to supply that research. The government needs to assess this information to understand why the residents of the province see a shale gas industry as harmful to human health and the environment.

NBASGA is pleased to see that the government is standing by its commitment to enact a moratorium, but it must be a moratorium that reflects a clear understanding of the many concerns and issues; one that protects all people in New Brunswick, particularly those who live in the targeted lease areas.

For example, we cannot state that everything in Penobsquis is fine when anecdotal evidence says otherwise. Likewise, the claim that Potash Corporation cannot function without shale gas must be publicly and objectively examined to determine if that is true.

In addition to this, SWN is engaged in ongoing lawsuits in the U.S. with regard to royalty fraud, human health issues, and environmental degradation. Corridor has yet to pay income tax in NB, and has brought just a handful of jobs.

For the past 50 years, successive governments have pursued an industrial and resource-based focus that has not created the promised wealth and jobs, but has proven detrimental to our health.

If New Brunswick’s continued policies depend on the same extractive resource economy, it is doomed to the same failure that that strategy has produced throughout our history. The government now has the opportunity to display innovative leadership on clean energy, but it will take a more dedicated approach than the commonsense decision to restore Efficiency New Brunswick.

Meanwhile, more reports are appearing on the economic and job creation benefits of the clean energy sector. The employment and economic benefits in other jurisdictions, such as Ontario, Massachusetts, Vermont, Germany, and Denmark have exceeded the returns on investment in the shale gas jurisdictions.

And we cannot stress too much that this discussion is taking place as the leaders of the world are meeting in Peru to come to terms with the present and ever-growing threats of climate change. Climate change is the number one threat and challenge of our time. We simply cannot engage in any new fossil fuel development without contributing to our self-destruction.

As the organization that has been actively involved in public education based on science, we are ready, willing and able to meet with caucus members to share peer-reviewed research before a decision on the moratorium is made.

We implore the government to listen to those residents whose only motive is in the best interests of the future of NB – to remain as a place to live a healthy and prosperous life for ourselves and the generations to come.