The numbers cited by our government appear to be picked from thin air, are baseless and are designed just for the election. Economists don’t see how they can work and the government will supply no supporting data.

We have all heard David Alward claim that, by drilling a modest 50 wells per year, the province will earn $200 million in annual royalties. He does not say how he arrived at this figure. His math even baffles our province’s top economists.

In British Columbia, they drilled thousands of wells to earn $200 million in royalties.
New Brunswick currently has about 50 producing gas and oil wells. The total royalties average roughly $1 million per year. One million is an awfully long way from $200 million. We earn more than a million from our gravel and sand industry.

New Brunswick’s university economists have analyzed the current royalty scheme. They say these are the lowest royalty rates in North America and that it is highly doubtful that New Brunswickers will gain any significant profits. They say it is an inefficient, over-exploitation of our resource. The government has dropped their earlier plan to share royalties with those municipalities and landowners who would be bearing the risk of shale gas.

The PC party must also further justify their estimates on job creation per well.
In four years, the only data they quote to support their job claims comes from the partially government-funded and widely disputed Deloitte report, a small and questionable survey that predicted a best-case scenario of 21 jobs per well.

However, we have examined a number of detailed fiscal policy reports based on actual figures from places where shale gas is being produced. These show an average of 4 jobs per well, while being highly critical of predictive reports like the one from Deloitte.
In New Brunswick, with our roughly 50 producing wells, we have less than a dozen ongoing full-time jobs.

Our question is this: Why should we base our decision on estimates from a questionable survey, when there are real life examples and hard facts to draw upon? 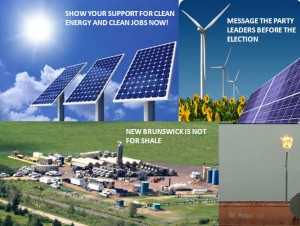 Shale gas is not the only way to bring New Brunswickers home and create jobs.

Multiple reports actually show that the oil and gas sector produces far fewer jobs than any other energy-related industry. Retrofitting infrastructure for energy efficiency, alternative energy development and mass transit each create up to 8 times the number of jobs created by fossil fuels. These figures are based on real-life experience, not hopes.

A clean economy requires the same skills that our people out west already have, and it fosters industries that would create career opportunities, retain college graduates, employ both genders, and save the existing jobs in our tourism and agriculture sectors that are now being threatened by shale gas.

What is the long-term economic viability of this industry?

The industry is a typical boom-bust venture that leaves communities worse off than they were. Its long-term viability is unproven.

Recent figures from the Energy Information Agency (EIA), investment firms and financial analysts show that the industry is $100 billion dollars in debt. And 75% of its firms are rated as below investment grade (junk status). As a whole, the industry does not make any money from the sale of gas. It survives on borrowing, and selling assets.

It also seems that some parties do not understand our Oil and Gas Act.

And to be clear, if an exploration company lives up to its requirements to invest a certain amount of money, it may automatically convert to production when it is ready. Thus, to put a moratorium on shale gas, you can not allow exploration to continue. You must stop both or you cannot stop either.

And as various parties talk about the necessity of having world class regulations, they ignore the recent report from the Council of Canadian Academies, which noted that there is so little research or monitoring of shale gas that no regulations anywhere can be said to be based on science. Regulations will not protect us.

But, perhaps the largest piece of missing information and discussion concerns the effects of this industry on climate change.

The day before our provincial elections there will be massive demonstrations around the world focused on climate change.

The world’s scientists, militaries, insurers, financial institutions, food and water specialists, and experts in many other fields tell us that climate change is the number one problem facing the world. It costs us billions of dollars and thousands of lives per year already, and those numbers will rise.

All public policies – local, regional, national and international – must now consider the effects of policy on climate change and the problems that will come from it. Investments in those industries are likely to be lost as the world reduces fossil fuel usage. Yet, remarkably, only one party mentions this ultimate threat and issue in their party platform.

Our concerns about unconventional oil and gas are not just the immediate threat to our health and environment caused by extraction methods, but also that we will be adding a new source of greenhouse gases to the fossil fuel mix that threatens us and future generations.

For the past 4 years, volunteers within the Anti-Shale Gas Alliance of New Brunswick have worked hard to get existing science to the people of New Brunswick in an understandable way. We have succeeded in bringing to light the costs and impacts of this industry and making shale gas a hot campaign issue in this election. All of our concerns have been validated by Canadian scientists, and yet, we see the same overinflated numbers and misleading information on economics and jobs being used to gather votes and sell this industry to the public. It is time to eliminate the spin and get honest about this issue.

The lawsuit that we have filed awaits whichever party wins the election. We are asking that a high standard be used to judge the scientific and health claims of the safety of this industry – “beyond a reasonable doubt” – the same standard for deciding guilt or innocence in court. High stakes demand a high standard.

So politicians take note. Deciding how to respond to this lawsuit will be one of your first tasks. Please take this seriously for all our sakes and start talking honestly about it now.