Not one company disclosed information on even half of the 32 indicators. 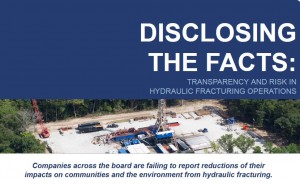 The highest score was 14. Southwestern Energy (SWN) tied for next-to-last, scoring a 2, with absolutely no information on toxic chemicals or community impacts. The scorecard concluded, “company disclosures are insufficient to meet the needs of investors seeking to evaluate how companies are reducing the potential health and environmental risks of natural gas and oil operations using hydraulic fracturing in the United States and Canada.”

“Leaks, spills and explosions continue to make headlines and demonstrate the risks of hydraulic fracturing,” noted Lucia von Reusner, of Green Century Capital Management. “Unfortunately companies are failing to provide enough evidence to assure shareholders and the public regarding steps being taken to protect communities and the environment from the adverse impacts of hydraulic fracturing,” even though, “unaddressed community concerns are among the leading drivers of bans and moratoria.”

If SWN and the industry provide so little hard data about the safety of operations to their stockholders, of what value are the shiny brochures they provide to the public, or the advice they give to government?

Where is the hard proof of their claims about safety and public health?

Because our government wants so badly to believe the financial promises made by the industry, it seems willing to also believe industry promises on safety without asking for proof, while ignoring the warnings from a myriad of independent scientists and public health experts, including the prestigious Council of Canadian Academies.

There is potential danger in the government’s blind acceptance of industry claims.

Currently, the municipality of Dieppe’s sewage system is being asked to accept fracking wastewater from Nova Scotia. No matter how this issue is resolved, the root of the problem is that the drilling and wastewater companies did not reveal the wastewater’s toxicity and radioactivity until questioned. This is not unusual. 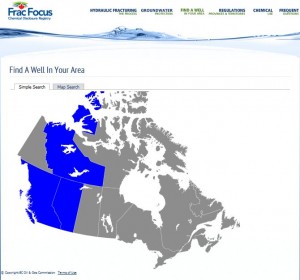 New Brunswick, like many states and provinces, requires companies to list all wells, and their fracking chemicals, on an industry-run website called FracFocus. Multiple audits of FracFocus have found that many wells were never listed, much of the information was late, incomplete or incorrect, and companies were able to go back and alter information without leaving an audit trail.

These are the kind of governmental “tough regulations” that industry likes. Are the rosy financial promises industry feeds the government any more credible than their safety claims?

The Energy Information Agency, which tracks financial and production data, says the industry has not profited from the actual sale of gas since 2009. (Read A Big Summer Story You Missed: Soaring Oil Debt
in the Tyee for a wider perspective on this). Its expenses and dividends are met by borrowing and from the sale of company assets.

Industry debt has almost doubled over the last four years, while revenue has gained just 5.6 per cent. The largest producers have written off $35 billion in losses.

Roughly 75 per cent of the companies are rated as below investment grade (‘junk’ status). They survive only because the current financial downturn allows companies to borrow money at near zero interest rates.

The government’s unquestioning acceptance of industry claims made in private meetings seems to be a part of our political culture, whatever the issue.

Our next government must forego wishful thinking based on reassuring but empty promises from those who hope to profit from our resources, and instead listen to the independent scientists, doctors and analysts who warn us that shale gas is a risky business.

Commentary by JIM EMBERGER
(published in the Fredericton Gleaner September 9, 2014)