It’s not as if there’s some mysterious force wrecking the climate, with nothing we can do besides learning to live with it.Rather, it is undeniable that the climate-change culprit is our burning of fossil fuels, and the way to slow climate damage is to simply burn fewer of them.

This elementary and obvious policy solution, however, seems impossible for some to publicly acknowledge. Perhaps, that’s because once you acknowledge a fact, then you must act on that knowledge even if it is uncomfortable.

Mr. Phillips could have painted an even darker picture. Numerous studies show the climate is changing faster than originally thought and will result in an even hotter world. This past month’s global heat wave shattered temperature records worldwide, often by double digits. Fifty-four people died in Quebec as a result of the heat wave. 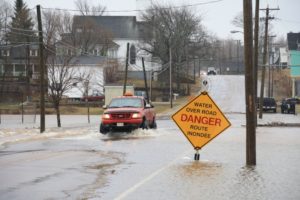 It’s a foreshadowing that should focus our minds, much like the record-breaking floods in New Brunswick. Adaptation to such catastrophes will certainly be necessary, but there are limits to adaptation, especially if conditions continually get worse.

How many times can you raise the height of a dike, seawall or house on stilts? For trees destroyed by tropical storms, ice storms, warmer temperatures and an ever-growing list of invasive species, it’s too late to adapt.

And when it’s too hot to work (or even exist) outdoors, adaptation has reached its end, as it is already has in some places.

The only long-term solution is to keep conditions from getting worse, and that means reducing our use of fossil fuels.

Recently, I asked Progressive Conservative leader Blaine Higgs how his plans to lift the moratorium on fracking and promote a shale gas industry fit into plans to combat climate change. It was actually a trick question, because there is only one answer: To slow climate change we cannot exploit any new fossil fuels, and we must leave much of what we have already discovered in the ground.

This reality now drives global economic trends, which cast doubt on the wisdom of any new fossil fuel investments.

New studies predict that the plunging cost of renewable energy, advances in battery storage, electric vehicles and energy-efficiency measures will reduce the demand for fossil fuels so significantly that $1 trillion dollars of fossil fuel infrastructure will become worthless by 2035.

If governments act to reduce emissions as well, the losses grow to $4 trillion dollars and the timetable is shortened by years.

The U.S. and Canada would be the biggest losers in this scenario because they produce the most expensive fossil fuels – fracked oil and gas, and oil sands. New Brunswick is fortunate to not have much existing unconventional fossil fuel infrastructure at risk.

But the Atlantica Centre for Energy and Encana claim that now is the time to build a shale gas infrastructure, because current supplies from Nova Scotia will soon run out, leaving 8,600 buildings without gas.

The obvious rebuttal to this argument is to simply buy gas from elsewhere. But an even better answer is that most gas customers can switch to cleaner sources of energy, which they will eventually have to do anyway. The government and NB Power could even assist in their transition, as part of climate, innovation and energy-efficiency programs.

In any case, New Brunswick has 319,773 private dwellings and 30,164 businesses. Simple math shows that 8,600 gas-using buildings make up only two per cent of the total. This hardly makes a case for undertaking the huge financial, health and environmental risks of building a new shale gas industry.

Ireland and Scotland also have fracking moratoriums. Ireland just decided to dis-invest all government funds from fossil fuel projects, and Scotland is debating whether to even accept fracked gas from other countries.

Canada, however, remains among the world’s top three contributors to climate change on a per person basis, due to the high greenhouse gas emissions of our unconventional fossil fuel industries.

Surely, our New Brunswick moratorium makes the moral statement that “we” at least won’t make things worse for our children, the world and ourselves.

Keeping the moratorium not only protects us from fracking’s many threats to our health and the environment. It also helps slow climate change, and keeps us from making an unnecessary and seriously self-destructive fiscal decision.