Implicitly, an ‘informed’ decision can be reached only after the people have been presented with all the accumulated scientific, economic and public health information – both for and against. Therefore, a discussion of social license cannot even begin until all the pros and cons have been identified and examined (the subject of the other four mandate instructions).

Thus, the recent announcement that Sussex has granted social license for fracking is simply putting the cart before the horse, and has little meaning.

The reasons why this is true were self-evident in what wasn’t said, and who wasn’t represented, at the Sussex announcement.

Despite the existence of hundreds of studies that associate shale gas with a host of problems concerning public health, water and air contamination, methane leakage, climate change, and wastewater disposal, none of them were mentioned.

When suggesting that fracking wastewater from Sussex be disposed of in municipal sewage treatment plants, no one seemed aware that the US EPA recently banned that practice, following numerous studies showing that it failed to protect both water and public health.

Other recently published health studies have added reproductive and development disorders and respiratory illnesses in children to an already long list of diseases associated with fracking wastewater and chemicals. In most of these studies, researchers found it ethically necessary to issue warnings and call for more research.

The fact that there are so many studies should give us pause, as should the fact that neither they, nor the views of the medical and public health communities, were mentioned in the Sussex meeting.

It should not be forgotten that those communities, including organizations of doctors and nurses, hospital medical staffs, and groups like the NB Lung Association all support a moratorium. Have they no voice in establishing the risk part of the equation for social license? 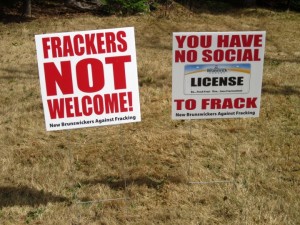 That citizens are unaware of the above facts is a problem for which New Brunswick’s government, media and business institutions must take responsibility. To be informed in any detail, citizens are forced to investigate matters on their own.

For example, in three famous cases in the US, the EPA was forced to end investigations of contamination due to political pressure. However, in all three cases — in Pennsylvania, Wyoming and Texas – recent independent studies substantiated that serious contamination did occur. This conclusion was punctuated with multi-million dollar court verdicts for several victims and dozens of out of court settlements.

In the Wyoming case, a study found that people living near wells were found to have blood and urine levels of chemicals used by the oil and gas industry in amounts that far exceeded normal background amounts.

You won’t find these discussed in New Brunswick, but with the absence of such knowledge from the discussion, how can informed social license be granted?

The government mandated the Commission to examine the, “Clear and credible information about the impacts of hydraulic fracturing on our health, environment and water.”

The Commission’s examination reached the same conclusion that virtually every other scientific review reached — that there are substantiated risks, and potentially many more risks that have not been adequately studied. Pro-fracking forces criticized that conclusion, complaining that the Commissioners were not scientists. However, several weeks ago Newfoundland released the report from its review panel, made up entirely of scientists and experts. They recommended a moratorium with even stricter conditions than New Brunswick’s commission.

These must be the bases on which citizens decide social license. Anecdotal evidence and editorial opinion influenced by local economic interests does not constitute an informed discussion. And any discussion must involve all affected parties.

Any spill of chemicals or wastewater entering flowing water will be transported downstream, with documented severe consequences. Air pollution from gas operations is well documented as traveling hundreds of kilometres.

Were the people downstream and downwind of Sussex, who would bear these risks (and probably receive no benefits), consulted about social license?

Because he is newly appointed, Energy Minister Doucet can be excused for mistaking Sussex’s largely unexamined claim as actual social license. That cannot happen until all the other mandate conditions are met.

So, he and his government are right to follow the procedures they set up in the moratorium, without exception.