In both announcements it was clearly stated that the long-term health and environmental costs of shale gas would outweigh any short-term economic benefits.

Both decisions rested on the issue of threats to public health, including a statement by New York’s medical officer that he would not want his family growing up in a shale development area. Both governments conducted exhaustive research, coinciding with several separate, independent reviews of all the existing scientific literature surrounding shale operations and health.

All these reviews concluded that there were substantial, documented health problems and, importantly, the research indicated a vast potential for serious problems that required much more study before proceeding.This conclusion means that it will take many years and many studies before shale gas can pass any objective conditional test regarding its health effects. 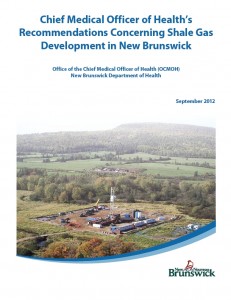 So, statements from shale supporters about quickly meeting the Premiere’s moratorium conditions should be dismissed. They are simply a continuation of the pro-shale tactic to never mention any possibility that shale development could have negative health effects. Recall that it was only public pressure that forced the Alward government to release our Chief Medical Officer for Health’s report.

The sole pro-shale argument, based entirely on conjecture, has always been about economic benefits. Current events cast doubt even on that argument.

The financial turmoil happening now in the oil sector should be taken to heart. Provinces and countries that have made oil development the engine of their economies are reeling from the plummeting price of oil.

In Canada the cost of producing oil is now more than the price for which it can be sold.

While these financial problems of the oil patch have been recognized, the situation with shale gas has received less attention. Before the price crash, shale oil had at least been selling at a profit. Shale gas, however, has not sold for a profit since 2008. The industry has survived on the ability to borrow money at almost zero percent interest, convincing investors that soon the price would go up (perhaps by exporting liquefied natural gas [LNG]), and government subsidies.

British Columbia is a case in point. According to the B.C. auditor general’s 2014 summary, subsidies provided by the government to the shale industry since 2008 have reduced government gas revenues by two-thirds. Current public and industry records show that the government now extends more credits to the shale gas industry than it earns in revenue.

Due to falling demand and the pricing mechanisms for international sales of LNG, often linked to the price of oil, dreams of an export market for LNG from shale are also quietly fading.

Mark Carney, formerly of the Bank of Canada and now governor of the Bank of England, recently joined the world’s leading financial institutions in saying that new investments in fossil fuels may well end up as lost assets, because any serious response to climate change will render the fuels ‘unburnable.’

So, despite pro-shale lamenting, New Brunswickers should have no regrets about our moratorium. It will stop an industry that by all current knowledge threatens our health, is an extreme financial risk, and probably has no future. We can now seize more realistic opportunities.

Let’s put New Brunswickers to work retrofitting our homes, businesses and infrastructure for energy efficiency. This brings immediate local job creation, local investment, and local benefits. Then we can examine the success stories of those places already reaping the rewards of a clean energy economy. It is a time to look forward, not to second-guess a wise decision.

Jim Emberger is a spokesman for the New Brunswick Anti-Shale Gas Alliance.