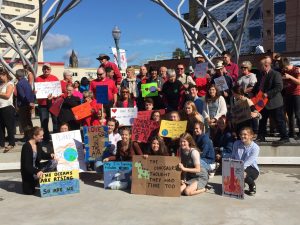 In 2020, the science is even more convincing and the disasters more numerous and apparent. Fears of COVID may now discourage mass climate demonstrations, but the need for them persists.

Mind-boggling fires that torched Australia last year now burn in California and the US West, where officials have exhausted all their resources to little avail.

Climate-connected conditions of long-term drought and an extended heat wave culminated in a ‘historic lightning siege’ of nearly 11,000 bolts of lightning in 72 hours, igniting hundreds of wildfires and creating “fire’nadoes”.

Temperatures in the heat wave reached 49 C in Palm Springs, while Death Valley recorded the highest land temperature ever measured – 54.4 C. These temperatures are at the limit of human survival.

Scientists state that we’ll see the first arctic summer without ice within 15 years, and that nothing can now stop Greenland’s ice sheet from shrinking.  Glaciers are disappearing rapidly and researchers are even re-evaluating the perceived “invincibility” of the East Antarctic Ice Sheet.

The increased intensity and number of these heat waves would be virtually impossible without climate change.

Heat’s climate companion is heavy rainfall, and it’s setting records too. While India experiences drought and record heat, summer flooding along the Brahmaputra River has displaced 3 million people. One quarter of Bangladesh is underwater.

A complete global list of evidence would include everything from increasingly destructive storms to plagues of locusts.

These climate disasters have affected harvests on every continent, some severely.  They also have a tendency to come in groupings – like drought, followed by forest fires, followed by floods and landslides – putting enormous stress on people and resources.

They even have a multifaceted relationship with COVID. The smoke and dangerous air quality from forest fires both increases susceptibility to COVID, and worsens its symptoms and outcomes.

People escaping heat waves once fled to air-conditioned public spaces, which are now closed due to COVID’s social distancing needs.  Evacuees from fire and flood must evaluate whether exposure to COVID in cramped shelters is less of a health risk than braving the disasters.

Climate change is now part and parcel of our world, and must figure into all of our plans.

New Brunswick responded well to COVID. Political parties cooperated to ensure widespread public acceptance of strategies. Every party had a say and a stake.

With an election now forced upon us, that may change. If a majority government is formed, it alone will own the COVID recovery plans. It is, therefore, important to know how each party will weave climate actions into those plans.

To date, our climate actions have not been sufficient or timely. Programs proven to address climate change and create jobs, like installing home insulation or heat pumps, get minimized in favour of glamorous but currently theoretical solutions, such as Small Modular Nuclear Reactors (SMNR’s).

There are those in the climate movement who think that such nuclear energy will be necessary.  Opponents note that most of nuclear technology’s problems will still remain. Supporters claim they are solvable.

I make no argument about whether SMNR’s may become a viable technology, but it is still in the conceptual and design phases. It’s widely thought that it will be 10 to 15 years before it is implemented – or before it generates any significant numbers of jobs, or begins to help with climate change.

In contrast, engineers in a recent Commentary touted the Maritimes as having the perfect conditions for becoming a renewable energy powerhouse, using offshore wind energy and energy storage.

Energy storage is one of the hottest areas of research on the planet, (and in the Maritimes). 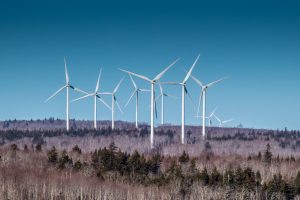 Wind energy is a globally mature technology that now produces the cheapest electricity in the world, with prices still falling due to continuous innovation.

We need to be acting on climate now – 2020 will be too late. COVID has obscured the news reached by recent studies that climate problems are worsening much sooner than predicted. As one scientist said, “We will have less and less time to get ready for it, or less time to act upon it if we want to do something about it.”

As I watch the puddle that is usually the Nashwaak River, and remember the record floods of recent years, it is obvious that New Brunswick is not immune to climate change.

In this election it is imperative that the parties tell us how they intend to combine climate actions with their COVID/economic recovery plans.  The two are inseparable for a successful future.